(0845hrs-0945hrs) - Swifts In The Community Project (Burton In Kendal represented by: Reg Hesketh, Jayne Phillips and myself)

We did manage to count at least 30 birds flying high above the Memorial Hall and there could well have been more in other parts of Burton which we where not aware of.

We did yet again establish a further nesting site, alongside the one mentioned last week on the low cottage buildings which adjoin the Post Office in Main Street. Four parent birds where seen to enter the sites within seconds of one another to the nest sites which where only some five feet away from one another.

We don't expect there to be many birds around by this time next week. But who knows for sure, because this year the birds were actually late in arriving by some ten days, so it could well be that this time needs to be made up or because of the superb "swift feeding weather" we have had, would this mean that they have already made up the delayed time.  We will take each day by its merits and if possible try and count the quantity of birds along with the possible exit date if this information can be gathered. Reg is currently summarizing the nesting site observations ready to had over to Peter who is the Area Organiser of the "Swifts In the Community Project.  I obviously will report back on this blog as soon as I have further information on the current status.

2115hrs - 2215hrs "Swifts In the Community Project" (Burton: Reg Hesketh, Jane Phillips and myself)
We've never been disappointed with our surveying over the past few weeks and seem to always be surprised by the numbers of nesting sites, and last night we were again very fortunate to find yet a further two nesting sites on the Manor House. We were helped with this by the owner Mrs. Ellis who pointed out a site which we where all unaware of.   Reg had found another site earlier in the week which is on the small cottages which adjoin the Post Office on Main Street.  Pipistrelle Bats were also noted close to the Manor House.  It was difficult to count the flying Swifts and although we recorded 38 last week, this week we perhaps only managed to count at best 25 so obviously we were missing some of them.  Its more than probable that the remaining chicks will all be leaving their nest over the coming few days and so we do expect some large numbers by the time of our next survey on Thursday next.

The survey now credits a total of 17 sites eg: (7 on the Manor, 7 on the Royal, 2 in Cocking Yard and 1 in the Cottages adjoining the Post Office. Just to think if each site did average at least 3 successful birds we could have as many as 50 birds in our skies by the end of next week.... (Wow!)

Over the years both here and down in East Lancs, with regular monitoring of Swifts, it has always been that the majority have usually left our towns or villages on or around the 4th of August, but I noticed last year in Burton my records show a group of 15 in the skies and last seen on the 5th August with a further single bird noted as late as the 18th August (probably a single passing through bird).  So it will be of great interest to note if possible this year's exit and just as important to try and establish just how many birds represent our village. 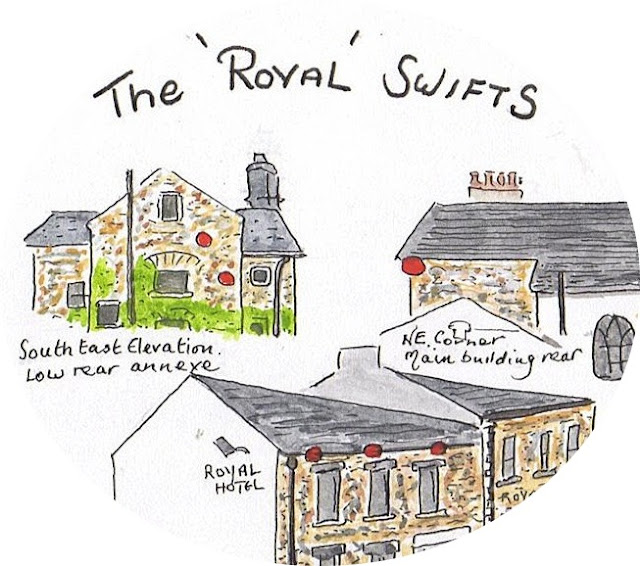 The above sketch relates to Monday 21st July 2013 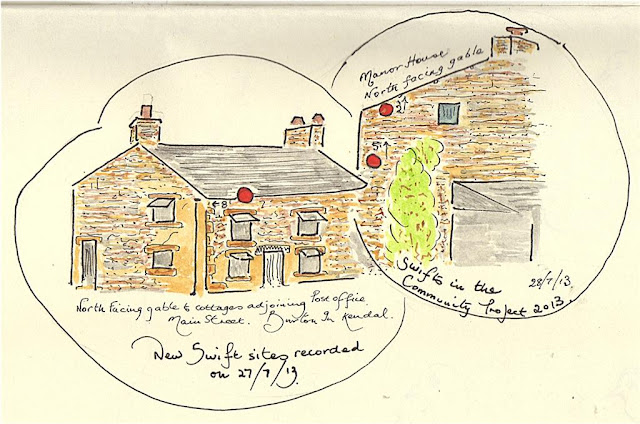 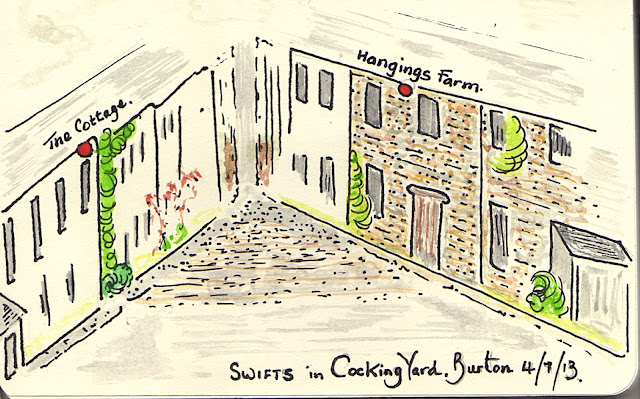 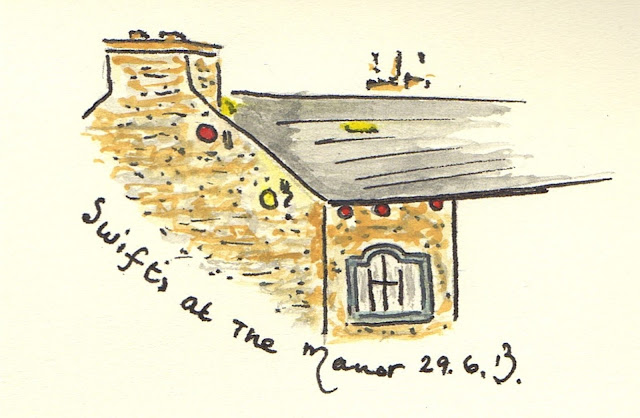 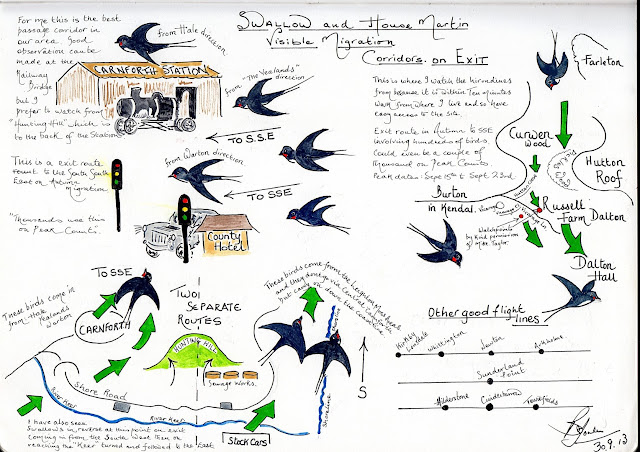 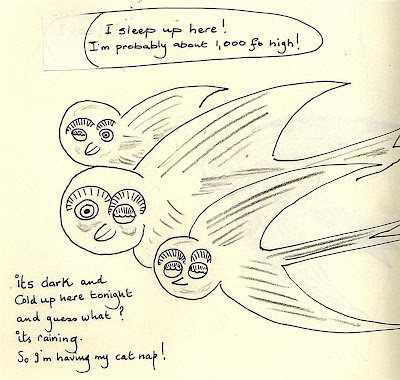 For over a week now, Swifts have been leaving our shores in their thousands.
Which for most of us would be at least two weeks earlier than usual.
I always reckon May 4th in and August 4th out.
Is it any wonder they are going early with the weather we’ve had!!

The young seem strong now so why feed here where its raining,
They might has well move down further South and get the spoils,
Of warmer weather, and more plentiful feed.
Why stay in dismal with a larder half full.
When they can be in bright and have a larder full.

I’m picturing them Swifts flying high in the sky,
Twenty four hours a day, they on the wing,
Just flying, flying away, all night long.
With one eye open to watch their path
And one eye closed to get their nap.

Our Swifts are still here and still screeching away.
Well they were this morning at six-oclock,
High in the skies over our beloved Burton.
There must have been at least fifteen,
Could have been more, but that’s what I counted.
So for me I would call that a fair breeding year.
Without problems, as I saw it.

Its sunshining today, now what did I say!
Sunshine is a rare commodity this year.
But the birds are telling us they are enjoying their day,
So why shouldn’t I. 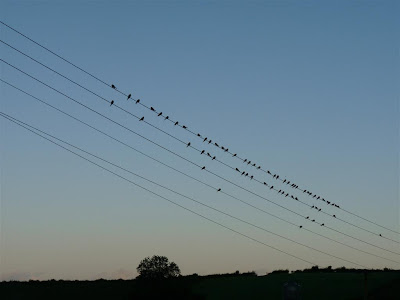 It’s a few days now since the Swifts left,
Well most of them that is, odd ones still to go,
But go they will, just like the Swallows and Martins,
Who have also started to leave us.

It seems only yesterday, I counted the first,
Swallow, but that didn’t make a Summer!
A few on the wires today, far less than yesterday, but!
Still some about, maybe they’re triple brooders!

Bye bye for now Swallow, do your best,
We want you back, with all the rest,
I’m counting now 232 days, to go!
Before your back, and when I can shout!

Fifteenth of May. Cherry blossom. The swifts
Materialize at the tip of a long scream
Of needle. ‘Look! They’re back! Look!’ And they’re gone
On a steep
Controlled scream of skid
Round the house-end and away under the cherries. Gone.
Suddenly flickering in sky summit, three or four together,
Gnat-whisp frail, and hover-searching, and listening
For air-chills – are they too early? With a bowing
Power-thrust to left, then to right, then a flicker they
Tilt into a slide, a tremble for balance,
Then a lashing down disappearance
Behind elms.
They’ve made it again,
Which means the globe’s still working, the Creation’s
Still waking refreshed, our summer’s
Still all to come —
And here they are, here they are again
Erupting across yard stones
Shrapnel-scatter terror. Frog-gapers,
Speedway goggles, international mobsters —
A bolas of three or four wire screams
Jockeying across each other
On their switchback wheel of death.
They swat past, hard-fletched
Veer on the hard air, toss up over the roof,
And are gone again. Their mole-dark labouring,
Their lunatic limber scramming frenzy
And their whirling blades
Sparkle out into blue —
Not ours any more.
Rats ransacked their nests so now they shun us.
Round luckier houses now
They crowd their evening dirt-track meetings,
Racing their discords, screaming as if speed-burned,
Head-height, clipping the doorway
With their leaden velocity and their butterfly lightness,
Their too much power, their arrow-thwack into the eaves.
Every year a first-fling, nearly flying
Misfit flopped in our yard,
Groggily somersaulting to get airborne.
He bat-crawled on his tiny useless feet, tangling his flails
Like a broken toy, and shrieking thinly
Till I tossed him up — then suddenly he flowed away under
His bowed shoulders of enormous swimming power,
Slid away along levels wobbling
On the fine wire they have reduced life to,
And crashed among the raspberries.
Then followed fiery hospital hours
In a kitchen. The moustached goblin savage
Nested in a scarf. The bright blank
Blind, like an angel, to my meat-crumbs and flies.
Then eyelids resting. Wasted clingers curled.
The inevitable balsa death.
Finally burial
For the husk
Of my little Apollo —
The charred scream
Folded in its huge power.