We started off from the Memorial Hall, and then moved on to Cocking Yard which turned out to be a very pleasant surprise.  Whilst observing we actually witnessed a Swift going into the left hand corner high elevation behind the barge board of Riggs House and the house owner came out and told us of another Swift nest site he had on the rear of his property and we were then kindly invited to go to the back of the house to check it out. The owner had seen a Swift entering his property on a regular bases and it was somewhere about the middle of the property on the high elevation. Not only that we were also assured by other house owners who approached us whilst in Cocking Yard that there were even more nesting pairs on another house on the right hand side and also on Hangings Farm and its adjoining property, again we were unaware of these sites so do intend to try and get some observations here over the coming couple of weeks.

We then moved on to the Royal in particular checking out the rear annexe of which we were still a bird short to fill the very large nest hole at the very top.  Sure enough tonight was one of those nights when everything was happening and before long we witnessed a bird using this site, which completes all the established nest sites that we are aware of on the rear of the Royal. Besides this one we also saw two birds enter the larger horizontal slit hole and also birds entering and leaving the small hole just above and left of the large slit hole.

Moving on to the front of the Royal and things got even better with a bird seen to enter a nest site to the LH side of the third window along on the high elevation (right hand side of building).  This again was the first time we have witnessed this site being used this year, bring the total nest sites being used on the "Royal Cottage and rear Annexed building" to a total of 9 sites which is fantastic!!

In the skies above Main Street and counted from around the Royal Areas we had a total of at least 15 birds in the skies, with plenty of small parties (up to seven in a party), screaming and chasing one another throughout the watch.

We then briefly checked out the Manor House, before going up to the rear and gable areas of The Coaching House.  We were inspired to check this area in particular because Sue had noticed a Swift leaving a new site on the rear upper elevation during the week, and sure enough we were not to be disappointed.  Although we did not see the one Sue had seen we were treated to a "grand performance" from other Swifts which had obviously occupied up to three separate sites on the gable high elevation.  We think that two of these sites are previously recorded.  So from Sues record and ours tonight we can confirm breeding in at least 4 new sites on the Coaching House which again is just fantastic!! 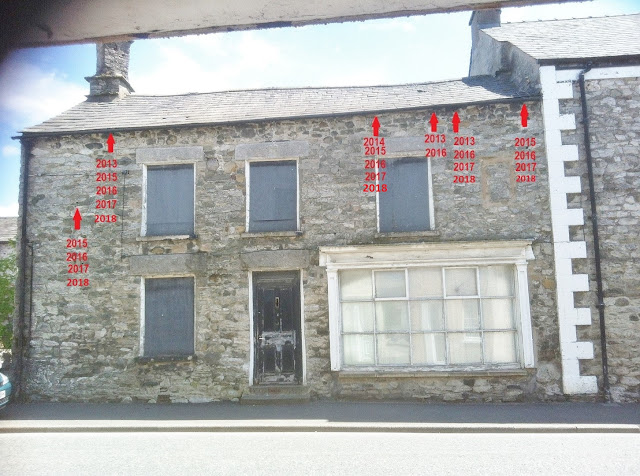 The next Swift watch will be next Thursday 5th July 2018 - Meeting at the Memorial Hall at new time of 2030hrs - Everyone Welcome
Posted by Bryan Yorke at 12:16

At least six Swifts constantly flying low within the square dimensional open cul-de-sac area of Glebe Close and every few minutes would be seen flying up to the eaves of the different properties as though trying to find nest sites or canvassing the area for a site or maybe for some other reason and without landing would immediately fly away and come back and repeat this behaviour on that or other nearby properties.  This is the very first time I have seen them doing this here and carrying out this strange behaviour for such a prolonged period (approx one hour). I wonder what could have triggered this strange behaviour and especially why here on the modern build properties (1980s) which are all tightly rendered up to and between the rafter ends and have no open access for bird nest sites. I can only think perhaps that these are immature birds from maybe last year or the year before. I cannot understand why breeding birds would have the time and energy to want to participate in this. I have also seen a similar behaviour to this here before performed by House Martins, but this only ever lasted for ten minutes or so.

Very little activity was seen tonight, we checked out the Post Office Cottages, Cocking Yard, the rear of the Royal and the Manor House.  We had a total of ten birds seen in the skies along the full stretch of Main Street.  We also watched one bird has it left the regular nest site at the Post Office cottages, and we also witnessed a bird enterting and leaving the nest site at the gable corner of the Manor House (ex Starling Hole!) It was clear skies and the opinion of the group were that most of the Swifts were feeding up at high altitude and escaping view.

The next Swift watch will be next Friday 29th June 2018 - Meeting at the Memorial Hall at 2000hrs - Everyone Welcome
Posted by Bryan Yorke at 03:40

The weather has changed considerably in the last 12 hours having just gone through severe strong winds, although the situation was beginning to settle down again.

It was a hit and miss to see the Swifts because at times the skies seemed almost absent and then you would see a small flurry with anything between 5 and 8 birds and just a couple of occasions did we have a party of three which were screaming.  The best count of birds in the sky tonight was 11 birds.

Whilst observing from the Memorial Hall, we were lucky to see one bird leave its nest site to the left hand side of the right window of the cottage next but one to the Post Office.  Also we then checked out Cocking Yard and was able to confirm the bird using its long established site at Hangings Farm and we were told also that it is possible they are using the site on the right hand site at the drop level with the black drainpipe (this needs to be confirmed).

We then went observing at the Royal Cottage and rear annexe but had nothing to report and then continued on to the Manor House.  At the Manor House I had one bird enter the lower gable site which the starlings occupied last year.

Tonight's observers were: Reg and May Hesketh, Hugh and Sue Miles and Bryan Yorke.

Here are photos showing the progress to date:


We checked out a total of nine birds in the skies between the Memorial Hall and over the Royal Hotel areas.  This week we concentrated our efforts on both the front and back of the Royal and it paid off with us being able to establish that a further five of the established nest sites were being used yet again this year and also a further additional site was also confirmed by Hugh who had earlier seen birds using one of the old established sites on the front of the Royal Cottage. This bringing the Royal total count now up to 7 nest sites being used as we know of.

We are also aware from past recent counts that a further 6 nest sites are being used on the Manor House, which brings the total nest sites so far being used up to 13 sites in residence.

Tonights observers included: Reg Hesketh, Hugh and Sue Miles, Bryan Yorke. We agreed to meet up again next Thursday at 2000hrs at the Burton Memorial Hall - Everyone is welcome

We changed our Swift night to the Friday evening because of the Bat Night being presented at the Memorial Hall on the Thursday evening.

We started off from Memorial Hall at 2000hrs and had counted approximately ten birds flying about this area but there could have been more.  We checked out Cocking Yard, The Royal and finished off at the Manor.  We noticed at least a further four birds over the Manor House area.  On our way back we managed to confirm a bird going into the front of the cottage to a established site on the right side of the building (see photo for details)

We estimate we have somewhere around the 15-20 birds back with us, which is somewhere about the average for us.

The next Swift watch will be next Thursday 7th June 2018 - Meeting at the Memorial Hall at 2000hrs - Everyone Welcome
Posted by Bryan Yorke at 08:32