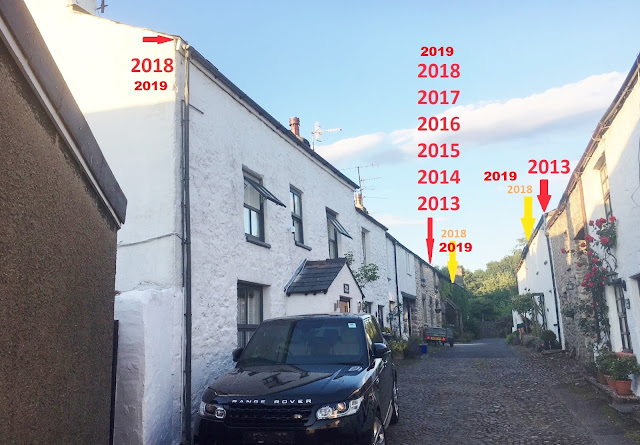 Showing the "Cocking Yard" nest sites as of now

We met up at the Memorial Hall, and counted at least 9 birds in the skies. After ten minutes we moved on and observed from the end of Cocking Yard were we witnessed birds going into the first property on the left at the established left hand corner entering the roof area by going behind the soffitt board. We first established this site last year and nice to see the site being used yet again.  We also managed to witness a bird going in and out of the Hangings Farm site, and also we kept seeing a bird entering or leaving the site to the right hand side of Cocking Yard 3/4 way up the Yard.  Peter a local resident of Cocking Yard also helped us by keeping a close watch on the nesting Swifts and was also able to confirm a couple of sites which we had questioned last year. This was a fantastic help to find out about these two sites and this now brings the Cocking Yard nest sites up to at least 4 on the cottage frontages.  We have also had indications that a pair may well be nesting on the rear of the first property on the Left but this has yet to be confirmed.

Even more good news follows when Sue told us that she had seen birds flying in and out of the rear of the Royal Cottage, using all the four sites eg: 3 regulars on the annexe and 1 on the return.  We were still short of confirmation in regards to the large hole at the top on the rear of the Cottage, so this is also now confirmed.

We moved on after a short check out of the Royal Cottage front were we had no birds for the short period we watched.

So we moved on to watch at the Coach House and the Manor House and we were delighted to be able to confirm yet another site on the gable of the Manor House, its a site 3/4 way up on the gable front side, just another one of the small hole sites which again can be confirmed now being used. We do have this site recorded each year since 2016.
We did also note activity on the Coach House with definite sightings of a bird leaving from the eave level on the gable, but things seem to happen so quick that we could not be sure at just which point the nest site was.  We also thought that maybe a bird also was using a site on the rear of the property, but again no official confirmation.

We also had a regular 3 birds flying together at times in the vicinity over the Coach House and the Manor House, this bringing the total seen in the sky to at least 12 birds. Little in the way of screaming parties tonight.

Nest sites occupied so far = (18) plus probable 2 at Clawthorpe.