After coming out of the Hall after watching a fabulous presentation on Bats given by Gail Armstrong, I then counted 15 Swifts in close proximity high over the Hall, Post Office building, so I guess we may have quite a lot back now!  hopefully tomorrows Swift night will give us a better indication.

We did count a approximate total of 15 birds in the sky but could well have been more, there were lots of excited chasing parties seen tonight at both ends of the Swift corridor, constantly going past whilst screaming away obviously enjoying the abundance of low insects. It was a fabulous watch and we were able to establish that all but one of the Manor House sites are currently being used (six sites in all)

Sticking with the Manor House we were very concerned at one point when we had already seen a Swift enter one of the regular gable end sites (the same site confirmed only last week), and this was quickly followed by yet another Swift into the same nest hole, but the 2nd Swift gave the appearance that it was stuck at the entrance and seemed to be doing contortions with a single wing which could be clearly seen sticking out and sort of twisting around as though it was struggling for movability.  What made it even worse was we then saw yet another Swift trying to get in the same entrance, but this was seen to abort on several occasions simply because the hole was blocked off by the earlier bird. After observing for almost one hour at this site we thankfully did see the bird eventually come out followed by the other one, so all was well after the event! Through all this commotion it did give us all chance to do a more complete study on the situation at the Manor House and we found that we witnessed that six sites on the property were being used.  We only have seven booked off so we are doing really well on the Manor, almost to capacity.

We counted at least 7 Swifts which at times were flying together chasing and screaming between the area of the Memorial Hall and the Royal.  Then we had a further four Swifts flying between the Kings and the Manor House making a approx total of 11 birds. 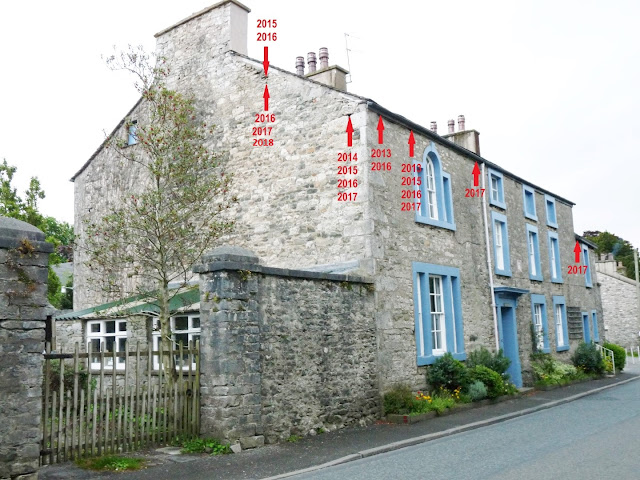 The next Swift watch will be next Thursday 24th May 2018 - Meeting at the Memorial Hall at 2000hrs - Everyone Welcome
Posted by Bryan Yorke at 04:11

(1945hrs) 16 Swifts flying above Main St with 12 flying between Memorial Hall and over the Royal with two of these seen to enter nest holes in the rear annexe to the Royal.  Also a further 4 at least flying over the area between the Manor House and the Kings Arms.

(2015hrs)  GOOD NEWS! At long last we now have 15 birds in the skies over Main Street between the Memorial Hall to the Manor House.

(0945hrs) Just had two birds which came from out of the front elevation eaves at the Royal Cottage. One single seen earlier high above Neddy Hill could well have been one of these birds - not sure, but the skies were rather birdless this morning.

(1300hrs) 3 Swifts chasing one another and screaming at the back of the Royal Area.

(0600hrs)  Just one swift seen around the Royal area

(1930hrs)  Two birds flying around the Royal rear elevations. Then watch has both birds went into a old nesting site we have down from a few years ago on the rear of the side elevation of the main building which goes up Boon Town Lane (witnessed from up near the Bowling Green facility) the birds both left the area after about 20 seconds or so. No more birds reported.

(2100hrs)  One noticed flying low to the back of the Royal Annexe.

(0910hrs) Two of our Swifts were seen to leave the upper eaves on the front LH to middle of the Royal Hotel. Both birds left simultaneously and were about two metres apart.

First four Swifts are back in the village and witnessed at around 1930hrs.  They were seen high to medium above the Manor House and the Royal Hotel Cottage.  One appeared to enter the eaves to the LH front of the eaves on the Cottage but this was not confirmed.